The Western Kentucky University Men’s Basketball Team fell to the Old Dominion Monarchs in the C-USA Tournament Championship on Saturday night 62-56. Here’s one final recap by RedZone Radio’s John Alden. Listen to John and the rest of the team discuss the events of the weekend Sunday night at 7 on Revolution 91.7.

Charles Bassey led the Hilltoppers in scoring with 12 points, and Josh Anderson and Jared Savage also made it to double figures.

Coach Stansbury had lots to say about his team during the postgame press conference.

“We didn’t make some shots as well as we have to,” Coach stated. “Give them [Old Dominion] some credit defensively. We still had our opportunities.”

Jared Savage said he was disappointed in his team’s lack of toughness in the early going.

“Whenever you play a team like that, they’re tough, they’re rough, they’re gonna bump you around,” Savage said. “You gotta bring that energy, and I don’t think we brought it the first half.”

When reflecting on the outcome, Coach Stansbury went back to what he’s been talking about since day one: a fine line.

“We take no moral victories away from here being in this championship game,” Coach said. “We want to find a way to win it, and winning and losing’s a fine line.”

The Hilltoppers will learn their postseason fate in the coming days. The team will likely earn a bid to either the NIT or the CBI. Coach Stansbury said he hasn’t given any thought as to whether his team will accept a bid or not.

Fans can watch the team’s press conference in its entirety on the WKU RedZone Radio Facebook page.

2019 has seen Americans dishing on  super moons, government shutdowns and Jordyn Woods, but the indie underground is steady streaming perhaps the biggest news this year has delivered yet—the release of Remind Me Tomorrow, the fifth full-length studio album release from the folk goddess herself, Sharon Van Etten.

While Van Etten bowed out of the spotlight for a time after 2015`s Are We There Yet, in the four years since her last album Van Etten has graced Netflix super natural thriller The OA, returned to college in pursuit of a psychcology degree, and gave birth to her first child.

But if you really want to know what she’s been up to, she dishes all in her most optimal album to date.

Van Etten’s fans have always regarded her for her atmospheric harmonies and poetically sultry pianos, and the new sound is a sexy as ever. Remind Me Tomorrow delivers all of the elements that hooked fans, with a freshly grated sprinkle of synthesizers and organs that adds a pop feel to songs like “Comeback Kid,” the first single.

Lines like “Yeah I’m the runaway / I’m the hardly stay / Let me slip away,” suggest a once hard-to-pin-down gal might be considering commitment, tying perfectly into the album’s theme. The 39-year-old is clearly comfortably in love, and this album depicts that in a way that’ll make ya want to do a little shimmy in the kitchen in your underwear, while you’re waiting for your bagel bites to cool.

“Jupiter 4” is eerily romantic, proclaiming “our love is for real” and giving listeners all the feels of euphoria felt in the arms of a secure relationship. It’s total “this is going to last a lifetime” vibes.

It awakens your 18-year-old self and inspires memories of creeping softly for a late night bathroom break, in an attempt to not wake your snoring partner. It leaves you aching for THAT all over again. Word on the street is that John Congleton produces this masterpiece, the same genius behind Phases by Angel Olsen, slanging a progressiveness that’s nothing if not stunning.

An open letter to New York City, “Seventeen,” is a sultry dance setup served with a side of Cindi Lauper-like chills. “Downtown hot spot / Halfway up the street / I used to be free / I used to be seventeen” signifies a tunnel back in time, reminiscing of both freedom and growing pains throughout innocent days.

“I see you so uncomfortably alone / I wish I could show you how much you’ve grown,” Van Etten piercingly trills. If life is like riding a train backwards,  so that only what’s behind us is visible, this tracks gives an all-knowing depiction that only a spiritual guru could match.

Remind Me Tomorrow is Sharon Van Ettens most tantalizing album yet, raw yet polished. She gets her grown woman on in a raw and sassy  storytelling mode with relatable insights into where she has been , where she is, and where she is going. Perhaps time has made my heart fonder, but maybe, just maybe, she truly is the ultimate comeback kid.

“How is that even tasty?”

Australian camp-goer David Muggleton asked this of a kangaroo he met in a public restroom in South Australia. The kangaroo was munching on toilet paper—yum?

Here’s another video of a similar incident. Is this a normal occurrence in Australia? DJs Sweet T and Left Lane weren’t sure when they talked about it on their show, but they thought you might want to see the videos anyway.

Let’s say you walk onto a college campus with a mind to start your own podcast. Where do you go if you want help?

For a long time at Western Kentucky University, the answer was unclear. Do you pick up a DJ shift with Revolution 91.7? Do you pitch ideas over at student publications? Do you pull out your phone and use the voice memo app to pull something together and hope your family and friends share the heck out of it on Facebook?

Maybe. Any one of those seems a route you could pursue. But doesn’t it make sense that the student organization with the most specialized audio equipment would want to have a hand giving WKU the flourishing podcast community it deserves?

Producing podcasts at Revolution 91.7 was the most straightforward solution to the distinct lack of podcasts at WKU. That’s why we’ve embraced the medium and launched three home-grown podcasts of our very own so far this year. 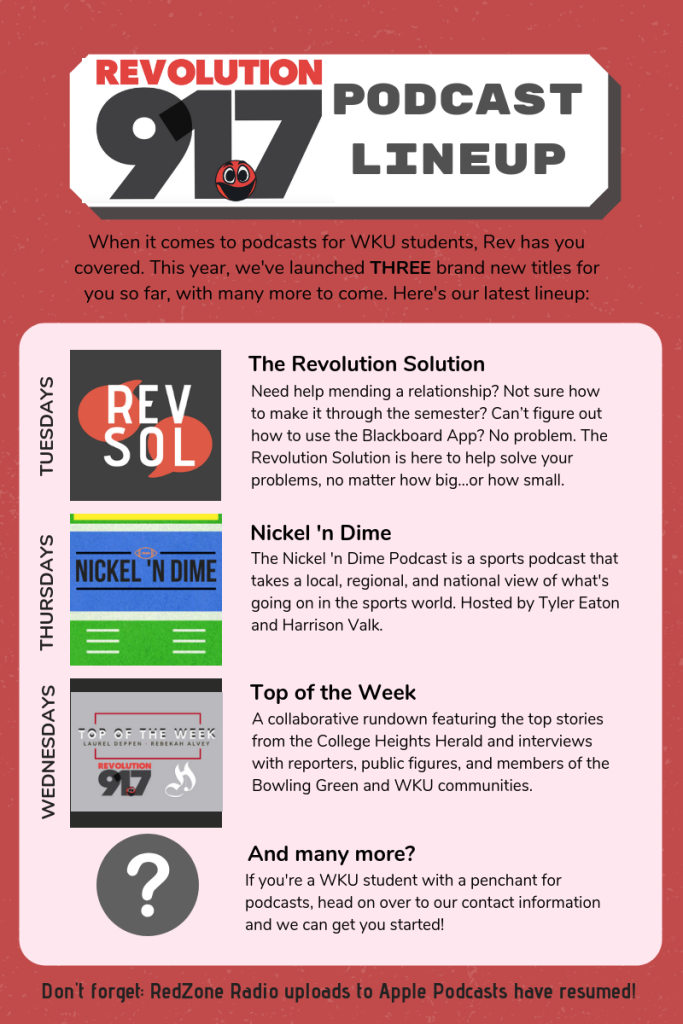 When I became Station Manager at Revolution 91.7, I saw opportunities abound. I’m thankful to have a supportive and innovative staff full of dedicated idea-engineers who have stepped up in producing these podcasts for WKU, and I know there are more out there.

Through podcasting, we hope to serve the community with entertaining, relevant, and informative content, all while giving fellow students the opportunity to learn about audio production and show structuring.

So as we embark further into the podcast world, join us in our journey. Give the “Nickel ‘n Dime” a listen when you can’t satisfy your football itch. Send “Revolution Solution” a question and hear the hosts discuss it on air. Check out our collaboration with the Herald “Top of the Week” while you’re climbing the hill to Cherry Hall.

And if that’s still not enough for you, why don’t you hop on over to that contact section at the bottom of this page and shoot us an email? I’d be happy to help get you started right away.

Sweet T and Left Lane goofed about a mysterious creature found floating around in the deep blue sea, but is it really as silly as they say?

Left Lane says “headless chicken monster” costumes are sure to pop up in Halloween stores next year. We’ll see about that.